The aim of ACL reconstruction is to restore function of the ACL and create a stable knee. This should allow the patient to return to sport and reduce the risks of further knee damage due to ongoing instability. Prior to surgery it is important that the patient has regained full range of movement of the knee. Following surgery it is essential to undergo a rehabilitation program supervised by an appropriate sports physiotherapist. Access to a gym is also essential.

ACL tears cannot normally be repaired by suturing it back together as this technique has been shown to fail over time. The torn ACL is normally reconstructed using a tendon graft. The most common tendon grafts used are the Patella Tendon and Hamstring Tendons. Both grafts have been shown to have good long term outcomes and which particular graft is used will be discussed with you by your Knee Surgeon. When hamstring tendons are used as a graft it has been traditional to use two hamstring tendons. With more advanced techniques using “tightrope” fixation, as undertaken by Mr Gill, the reconstruction can be carried out using only one hamstring tendon (semitendinosis) thus helping preserve the patients own hamstring function and aiding rehabilitation. 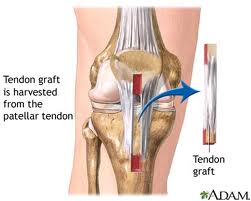 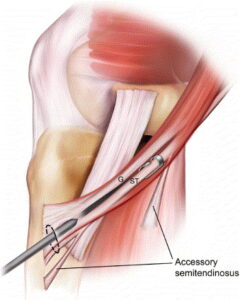 Once the graft has been harvested and prepared the surgeon will place an arthroscope (camera) into the knee and fully assess the knee for associated injuries (eg cartilage tears, loose bodies, damage to the joint surface). These injuries can often be treated at the same time. The old ACL stump is removed and the knee is prepared for insertion of the new ACL graft. Bone tunnels are drilled to receive the graft which is inserted using keyhole techniques. The graft is then secured in place using specific fixation devices. The knee is checked to ensure good stability has been achieved. The skin is then closed and shower proof dressings applied. 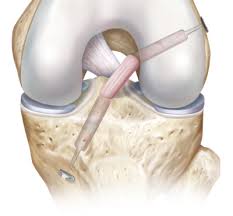 ACL reconstruction is usually done as a day case procedure and the patient should be able to return home later the same day. Prior to discharge the patient will be seen by a physiotherapist. They will ensure that the patient can mobilise safely and will also give a number of simple exercises to undertake on returning home. Crutches are provided but full weight bearing is encouraged and they can usually be discarded after a few days. X-rays of the knee are taken prior to discharge. The bandages are removed the next day and the dressings may need to be changed. The patient will see a sports physiotherapist as an out-patient to commence the rehabilitation program. Review by the surgeon normally takes place after two weeks at which time the wounds are checked, sutures are removed, unless absorbable sutures are used, and ongoing rehabilitation explained.

What are the Risks of surgery?

There is a small risk of infection. Precautions are taken to prevent infection including the use of intravenous antibiotics during and after the operation.

A deep vein thrombosis (DVT) may form in the calf veins and may extend up to the thigh. Precautions are taken to reduce the risk of DVT. These include early mobilisation post operatively and an injection to thin the blood . If a clot forms, a part of it may break off and travel to the lungs. This is called a Pulmonary Embolism (PE). A PE is potentially life threatening so DVT prevention is taken seriously.

Very occasionally bleeding can occur and the patient may develop a haematoma. If this were to happen then drainage of the haematoma may be required

Stiffness of the knee following ACL reconstruction can occur but is very unlikely particularly if the patient undertakes the rehabilitation program fully.

Injury to a nerve supplying sensation to the skin of the shin can occur particularly when harvesting a hamstring graft although this can occur to an extent with either graft. This usually improves with time and is very rarely a problem for the patient.

Care must be taken particularly in the early post operative period to protect the graft. This is taken into account in the rehabilitation program and will be fully explained. As a general rule return to any pivoting sport should not take place prior to 9 months after ACL reconstruction. Studies have shown that those people who have suffered an ACL rupture do on average fall into a slightly higher risk group for re-rupture in the future. The aim of ACL reconstruction is, however, to restore stability to the knee and allow full return to sports.

What patients say about Mr Gill